It is in the nature of a rescue team’s work that they have to climb fast, during the worst weather. For even the strongest, fittest and most skilful climbers, having 12.5 kg and the considerable bulk of half a stretcher strapped to their backs is a serious encumbrance.

Searching for a solution Hamish thought of reducing the bulk by hinging the stretcher in two places. He spent a great deal of time building test mock-ups, fine tuning the geometry until he was able to fold the stretcher tub and it’s handles into a compact backpack. Hamish patented this concept and started to try to make the new design light enough for one man to carry.

The twin hinge folding concept worked very well but sadly adding the hinges and the locking device that ensures that the stretcher does not fold when in use, increased the weight to 27Kg. Despite its compact size in a backpack, this weight was just too much for one man to carry. Hamish’s compact folding stretcher looked doomed to failure.

In desperation Hamish looked for engineering advice on how to reduce the folding stretcher’s weight. Someone at Highlands & Islands Enterprise knew of Richard Glanville and his work with carbon fibre and suggested that Hamish should speak to him.

One could say that MacInnes Stretchers Ltd was born when Hamish MacInnes walked into Richard’s Inverness workshop in 2002. 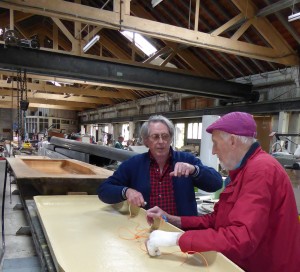 Despite their very different backgrounds they experienced a “meeting of minds” that soon developed into a friendship and a respect for each other’s abilities.

“It was not difficult to learn to respect Hamish; he exudes the quiet confidence of a man that knows what he is about. I was impressed by his steely determination to achieve his goal of improving the safety of all who, like him, enjoy being out on the mountains.” – Richard Glanville